Jozilicious is going to the Big Apple!

I’ve been going on (and on) about wanting to go to New York forever. And now: Visa’s and leave have been approved; flights and accommodation are booked, my life savings are exhausted- WE’RE GOING TO NEW YORK!!
We leave on 19 August and I couldn’t be more excited. I literally get heart palpitations everytime I look at pictures of Times Square or any of the other big attractions. It’s always been at the top of my “to visit” list but it is such a big holiday (in terms of cost and distance) that the timing was just never right. I also wanted to go when it was warm, which limited us to June, July and August. Convincing my husband was probably the most difficult part (he hates flying so a destination on the opposite side of the world is not really ideal).

Being the control freak that I am, I have researched everything that there is to research to the n’th degree. I want to avoid setting up a structured “itinerary”- I much prefer going with the flow, but I also don’t want to miss out on the best New York has to offer.

So, here’s my New York trip in a nutshell. I’ve tried to include links to the relevant websites wherever possible.

Flights: SAA. My worst airline experience to date. Bad service from the air hostesses, who really don’t give a crap about their jobs, and even worse (barely edible) food. Alas, despite being cheaper, no other airline flies direct to NYC and I really don’t want to make the journey any longer than it is already. 15 hours direct is going to be tough, but I’m planning to take sleeping tablets which apparently helps alot.

Hotel: I probably spent months researching the “best” deal. After investigating prices, I could immediately tell that a 5 star hotel was out of the question. I love boutique hotels- the service is alot more personal and the rooms are usually better than big chain hotels. I settled on Distrikt Hotel (found through my trusty source, Trip Advisor), and I have no doubt it’s going to be fabulous. Just the service I’ve received from them via email so far has been excellent. It’s situated 5 minutes away from Times Square!

Itinerary: Probably the most exciting part of the holiday is researching what we’re actually going to do when we get there. I would have thought that 9 days would be more than enough, but there is SO much to do- I don’t think we’ll even cover everything in 9 days.

I bought a pass called the New York Pass. It costs $180 for a 7 day pass, and this includes the entrance fee to basically all the attractions. Depending on how much one plans to do, you can save alot this way. It also allows for “fast track” entry into many of the sites, so no waiting in queues- bonus! Other passes on the market include the City Pass and the Explorer.

As soon as we get there, I want to visit the High Line and the adjacent Chelsea Market. The high line is a public park built on an historic freight rail line elevated above the streets on Manhattan’s West Side. Chelsea Market seems to have a Parkhurst kind of vibe… Day 2 will be spent at Woodbury Commons. This is like Cape Town’s Access Park on steroids. Hugo Boss, Armani, Versace etc all at hugely discounted prices. The funny part is the end of season stuff in the US hasn’t even hit SA shores yet! It’s about an hour out of NYC and everyone I know who’s been loves it.

On to the other stuff I simply have to do: 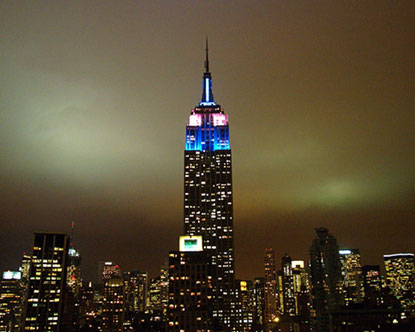 – Do the Gossip Girl tour. I’ve been absolutely besotted with the show since it started, and even though my husband would never admit it, he’s watched every episode with me since season 1. Apparently on the bus they show you scenes from the show, and then drop you off at the locations where the scenes were shot. How cool?!

– Shop. I’ve heard that some of the stores are attractions themselves. Macy’s, Bloomingdales- I want to see them all!

– Eat. I know I’m going to get fat fatter. Among other things, NYC is renowned for its bagels, pretzels and ice cream. I’ll have to starve when I get back.

– Visit Brooklyn. This picture says it all

– Go to the museums. There is a ton to choose from. MOMA, American Museum of Natural History and the Guggenheim are all on my list.

– See the Statue of a Liberty. This one is a given.

– Experience what it’s like to live there. New York is a city we’ve seen in countless movies and TV series. We’ve heard about it in songs and we know it’s the city that never sleeps. It is portrayed to us in a certain way, but what is life actually like once you’re there? I hope that in these 9 days I’ll actually be able to feel the city and come back with a little bit of that magic in my soul.

As Alicia Keys so aptly put it…

“In New York, concrete jungle where dreams are made of.. There’s nothing you can’t do, now you’re in New York.. These streets will make you feel brand new.. Big lights will inspire you, let’s hear it for New York.. “