Top 5 things to do in Singapore

When I first met Rishav, some 6 years ago, he was completely anti- travel. He thought it was a complete waste of money, and he just wasn’t interested in it. Now, he’s almost as much a travel addict as I am, and it was his idea that we zip off to Singapore for the long weekend, to experience the Grand Prix. Neither of us are F1 fans (I have to say I don’t think I’ve ever watched a race), but he had heard the vibe was incredible and well, I’m up for anything that involves travel, so a few days after discussing it, our flights were booked.

We flew Singapore Airlines, and were only there for 3 nights and 4 days before flying home again. It was a REALLY expensive trip- our flights were around R12k each, accommodation was R12k and the Grand Prix tickets were R6k each. We flew Economy, stayed at a normal 5 star hotel, nothing amazing, and booked mid-range Grand Prix tickets. Because it was Grand Prix season, everything was double the price- I don’t think we quite worked all of that out beforehand, but once the flights were booked there was no turning back. I think sometimes its about quality, not quantity that makes a holiday memorable. Yes, it was short and super expensive, but it was one of the best trips I’ve ever been on. Being in a city during a global sporting event just electrifies the experience. While I completely recommend you go to Singapore for the Grand Prix, I think you should combine it with a trip to Hong Kong and Kuala Lumpur to make it worth the long flight.

It was my first time to Singapore and I loved it. Being there for the Grand Prix made it that much better. The city was buzzing, being at the actual F1 track was super cool, especially because it was a night race through the city, and I LOVED the concerts after the races (which came included in our ticket price.) The first night, we watched the Killers. I’m quite a big fan, and seeing them in an open field, with the Singapore skyline surrounding me, joined by 100,000 other people was probably one of my best travel memories of all time. I was on top of the world that night. The next night we saw Rihanna, and she was awful. I’m actually not looking forward to seeing her in Jozi anymore- she basically lip synced through the entire concert. We spent the days touring and sleeping (we never quite got used to the time difference, Singapore is 6 hours ahead of SA), while we spent each night at the races, followed by tea and cake at one of the 24 hour coffee shops, or drinks at a nearby bar.

Watching the cars is cool at first, but they literally whoosh past you in a second, and then that’s it. It’s also SUPER loud, so ear plugs are necessary. Here are some snaps of the F1 area. 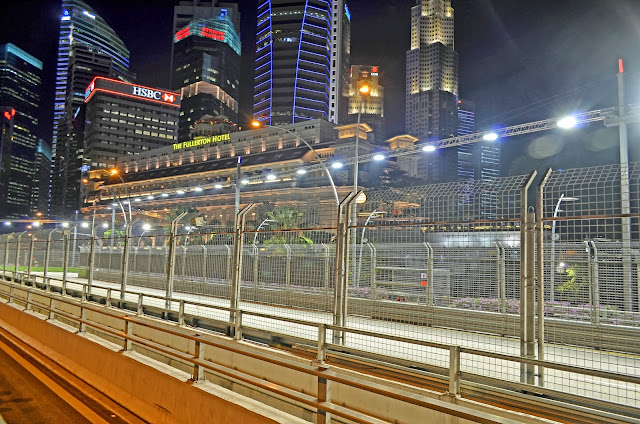 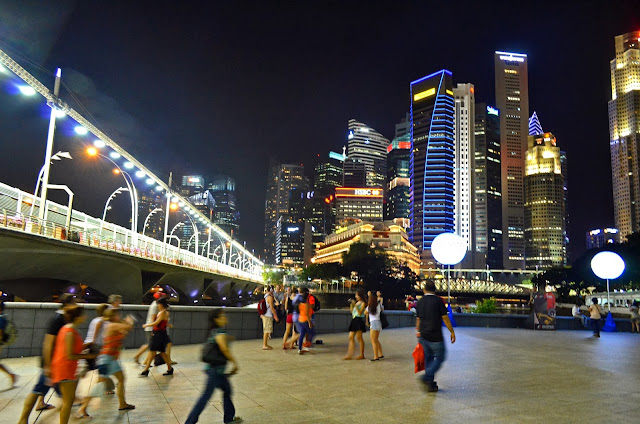 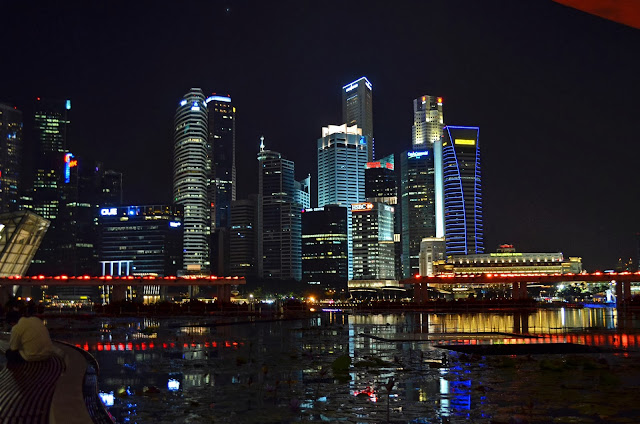 Singapore is an incredible city. It’s modern, extremely developed and very efficient. Everyone obeys rules, the subway is spotless and really easy to use, taxis are cheap, and there is quite a bit to do.  My office has a branch in Singapore, so I got tips from one or two “locals” in advance, which really helped, because we didn’t eat at any touristy places- and I’m big on food when I travel, as you know. I also met up with one of my old Facebook friends who now lives in Singapore- it’s always great to chat and hang out with locals. Rather than giving you a blow-by-blow account of the trip, I thought I’d share my top 5 things to do in Singapore.

1. Go to Gardens by the Bay
While Singapore isn’t overtly OTT- when it wants to go all out, it does. I’m sure you’ll be familar with Marina Bay Towers- the 3 towers with a bar on the top (Ku De Ta). Adjacent to this, are the Gardens by the Bay. The vision behind this was to create a City within a Garden. The gardens are spectacular, and there are two massive domes which you can go into. One is called the “Flower Dome”- where flowers from all over the world are displayed, and the other is called “Cloud Forest”, which reminded me very much of Iguassu Falls in Brazil- a tropical rainforest with a waterfall. It didn’t feel fake at all- and was really breathtaking and beautiful.
Visit www.gardensbythebay.com.sg 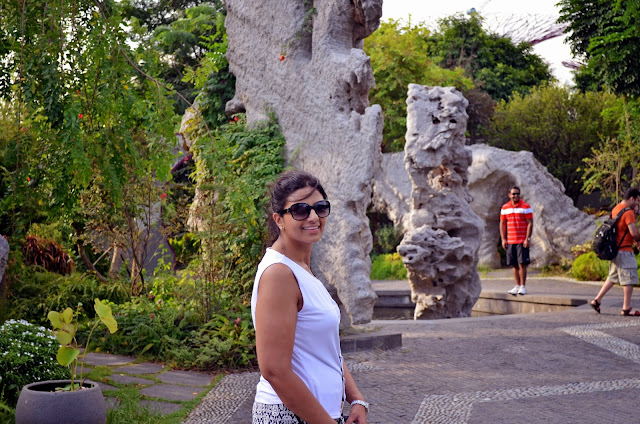 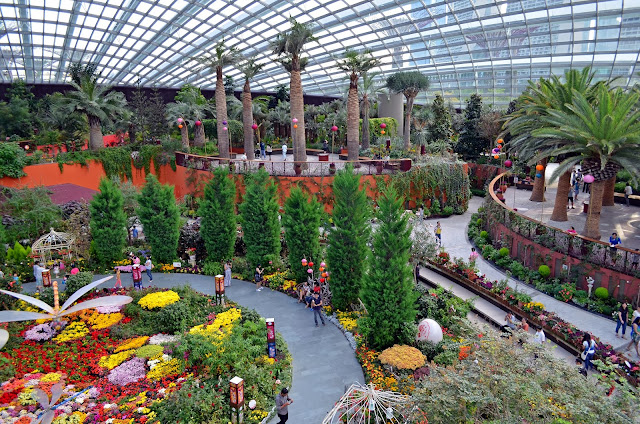 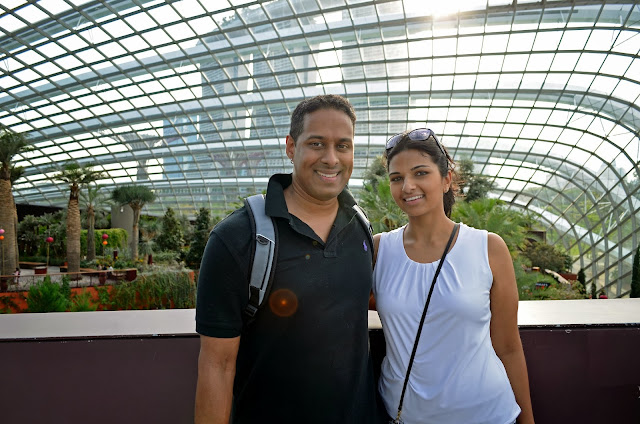 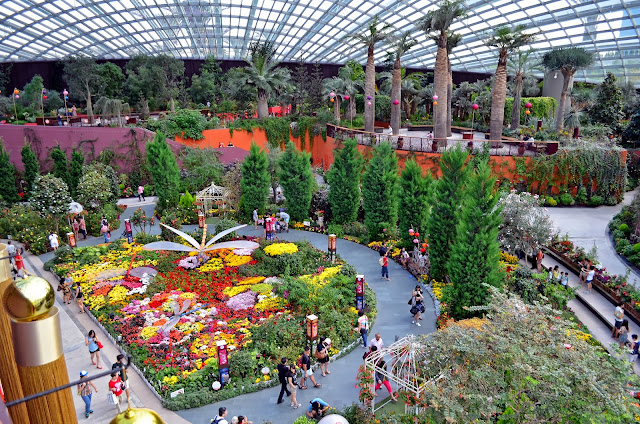 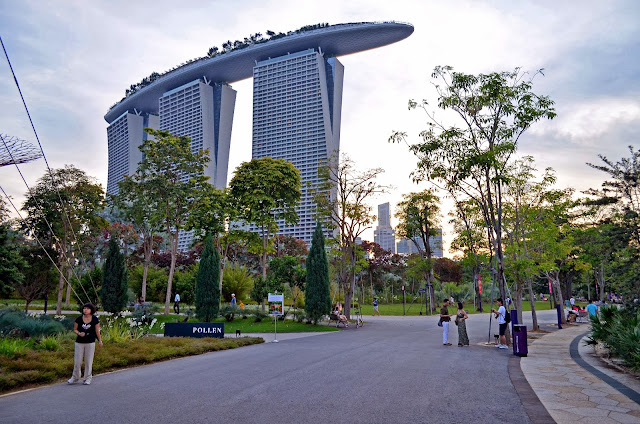 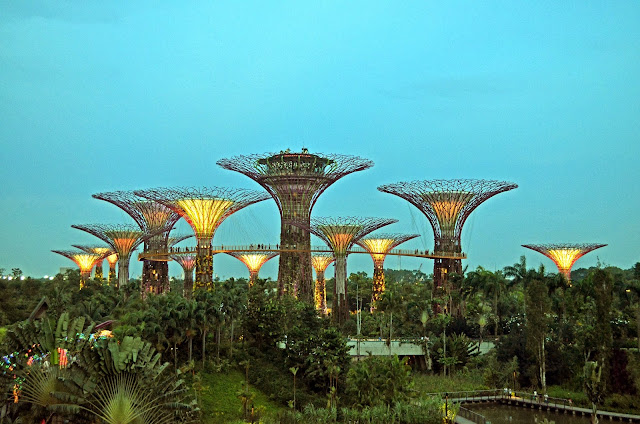 2. Visit Sentosa Island
While Singapore itself is slick, modern and busy, Sentosa is laid back, chilled and resort- like. It’s an island situated about half an hour out of Singapore, and Universal Studios is situated here. We didn’t have a chance to go there, but we did visit the aquarium, which is the largest in the world. There are free shuttles which take you all over the island. The beaches are completely manmade, with sand and palm trees imported from Indonesia. After that, we went to Tanjong Beach Club. OMG- I have never been anywhere like this before. It felt as though I was in a rap video. The pool was packed with people, drinking and chilling, while other people lay sprawled on daybeds. People were dancing in bikinis, or playing volleyball on the beach. The whole vibe was really cool.
Visit www.sentosa.com.sg 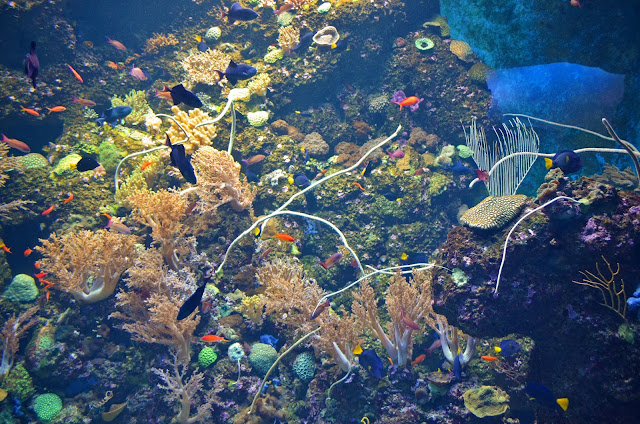 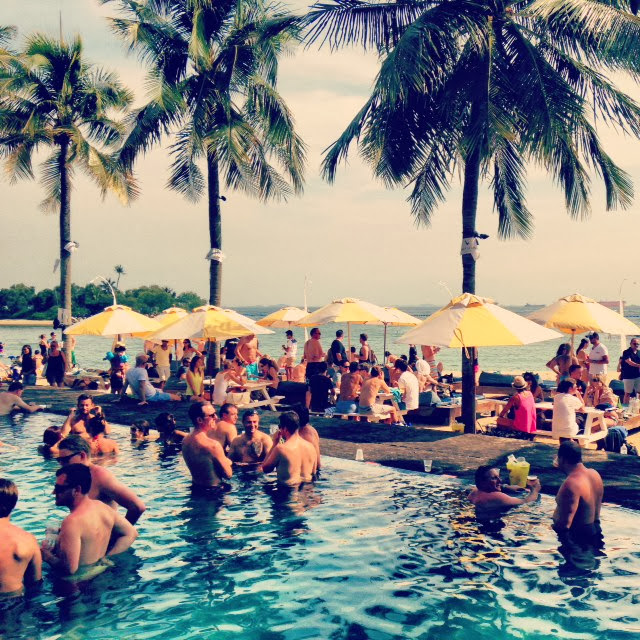 3. Take a walk down Orchard Road and (window) shop
Orchard road is the Champs Elysees of Singapore. While standalone shops do exist on the pavement, you will also see mall after mall. Some of these are high end, while others are local malls. Singapore was a bit odd for me because it felt like an amalgamation of all the top brands in the world, both shopping and food wise. I saw Burger King next to Haagen Dazs, Topshop next to Forever 21. It was weird to see all of this coexist happily, but it’s also really cool that you have the best of the best available to you. I avoid malls generally, but I love walking down a bustling street- I really wish SA was more pedestrianized. 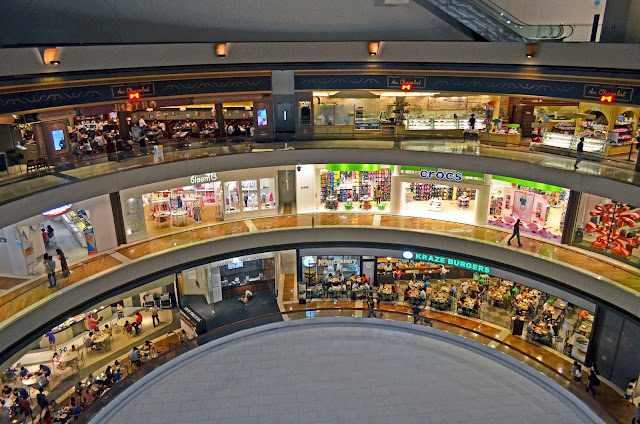 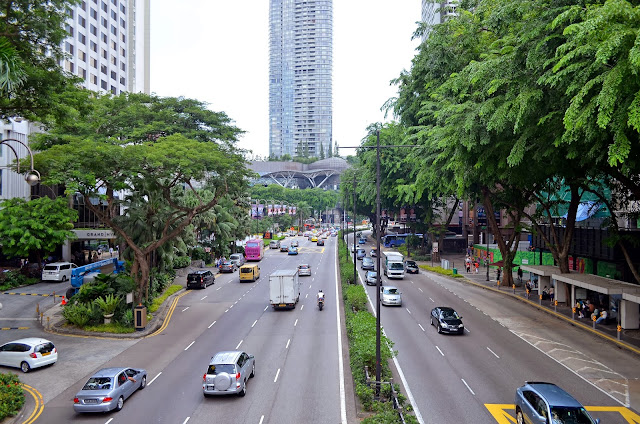 4. Eat local
Asian food is not my favourite, but I still wanted to eat some traditional Singaporean cuisine. Apparently it’s cheaper to eat out than cook, so at lunch time the eateries were packed with locals. All the food looked really fresh, and at the less fancy places the food is pretty affordable. On our first day, we went into a hawker centre, where I enjoyed pineapple rice- quite literally. 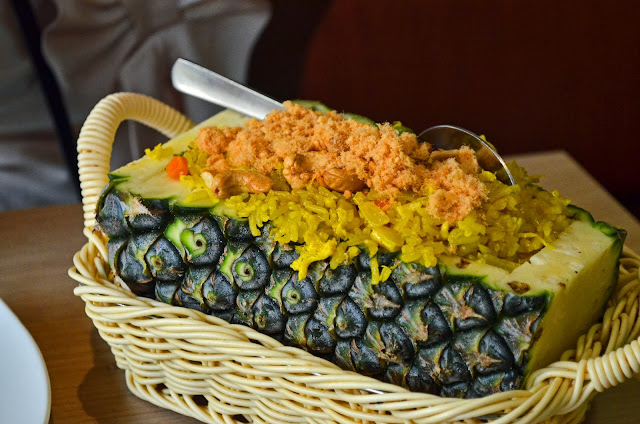 I’d heard that I simply had to try Chilli Crab, and that a place called Jumbo made the best version. So, we went to an area called Dempsey Hill, which is very 44 Stanley like, and squirmed a bit at the price ($56 = R400) for the dish, but ordered it anyway. The sauce is thick and almost sweet, and at first I was apprehensive because unless I’m eating curry, I don’t really like eating with my hands. There’s no other way to eat crab, and soon I was all up in there- yum! 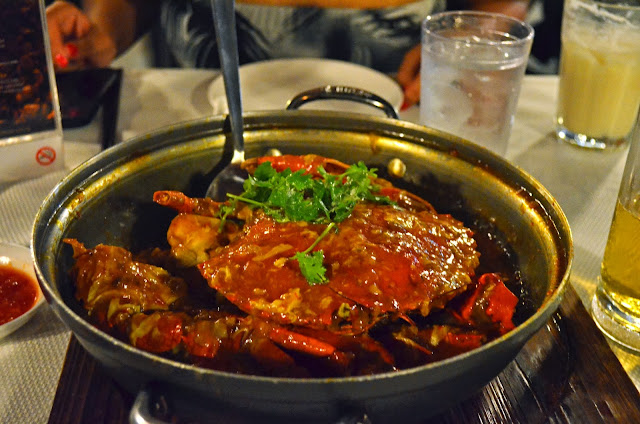 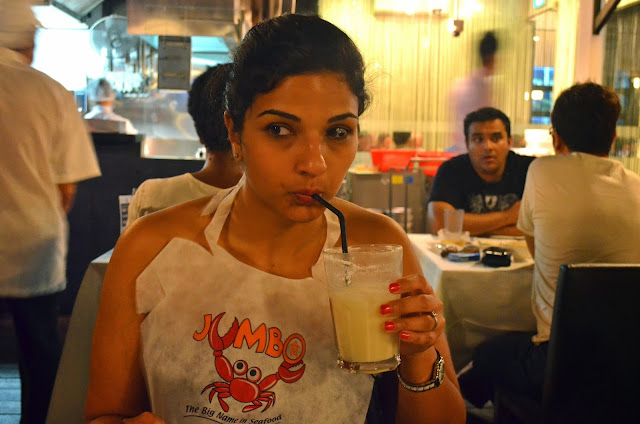 We also went to Little India, which is a bigger version of Fordsburg. We ambled around, looking at some Indian garments and marveling over the gold jewellery on display. Finally, we picked a spot to eat- it was as local as it gets. A huge stainless steel bowl of rice was passed around, and people dug into curries. I ordered Masala Dosa- my favourite- which it was sooo yum. 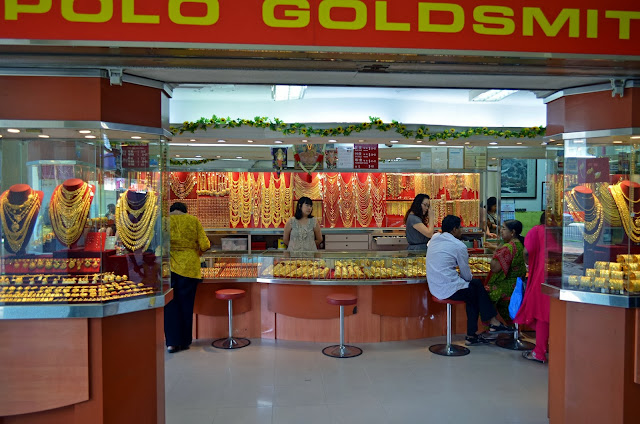 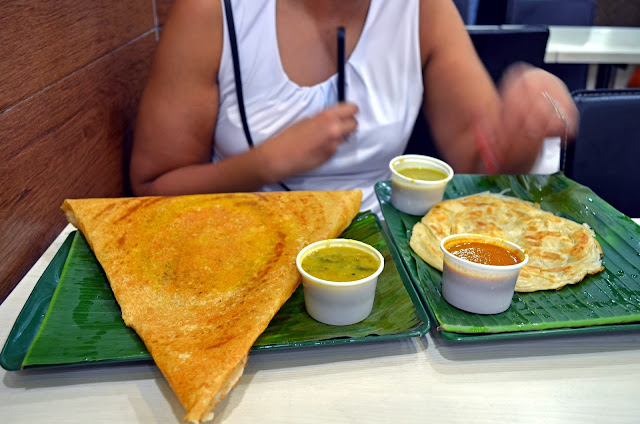 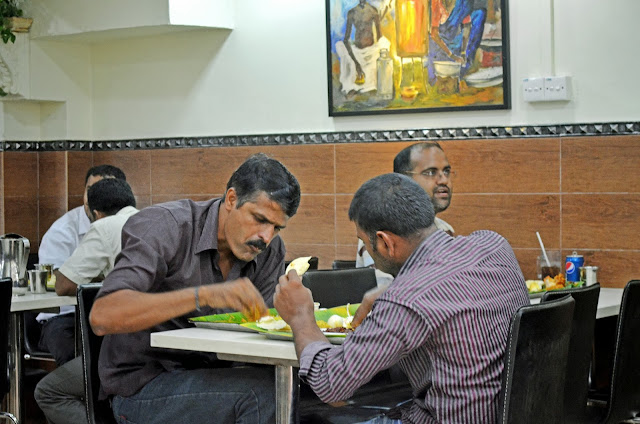 Paris has macarons, New York has doughnuts (and now cronuts) and Singapore has mooncakes. A mooncake is a thin, tender pastry skin enveloping a sweet dense filling, usually made of lotus seed paste or sweet bean paste. 1 mooncake contains around 1000 calories! These treats can be spotted all over Singapore, and although we didn’t try one, we did go to the cool little cafes for tea and a treat. Rishav and I are always like “let’s go for tea” instead of “let’s have a drink”- so we actually tried out quite a few of these little patisseries. 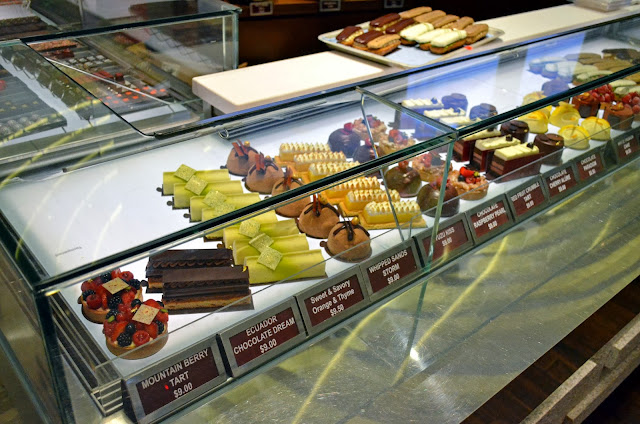 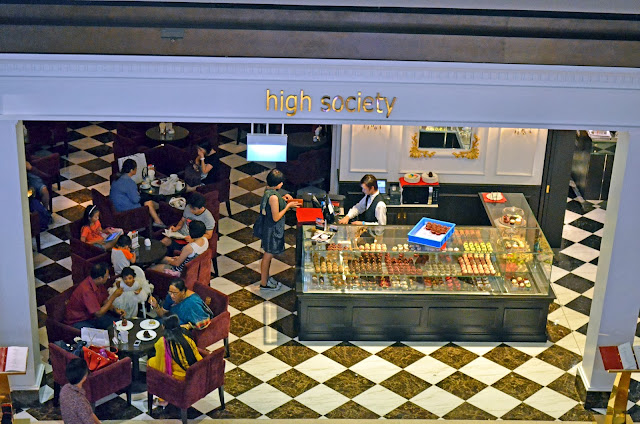 We also tried out Din Tai Fung – which is a dim sum institution. It’s Michelin starred and has branches all over the world. I’ve never been a dim sum fan, but here, after biting into the doughy ball, the most delicious gravy spilled out, enhanced with the flavour of spring onion. So good. 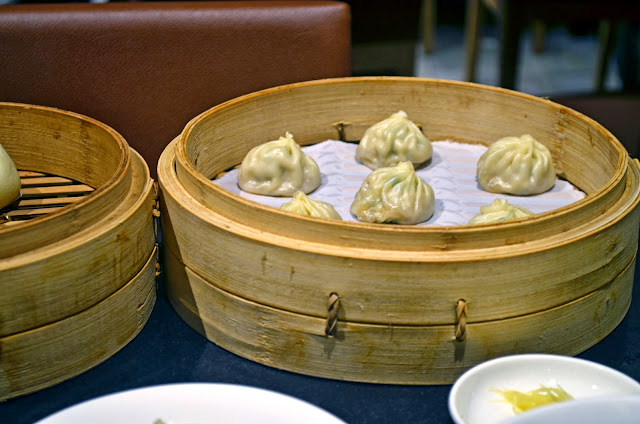 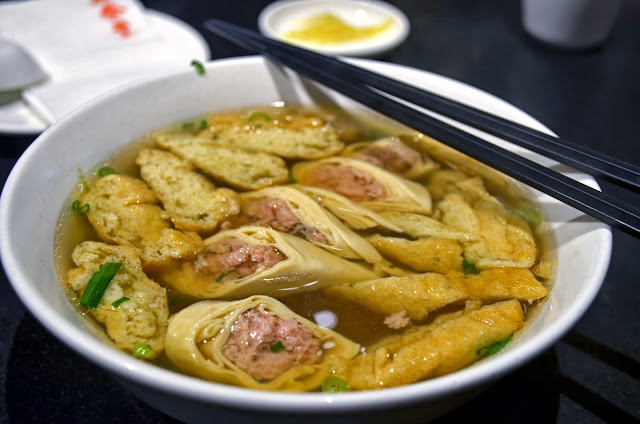 5. Visit a Rooftop Bar
Because Singapore is so small, space is limited, and hence, there are lots of highrisers, which inevitably make for a stunning view when high up. We tried to get into arguably the most well known rooftop bar, Ku De Ta, but they were having a private event so we couldn’t. We then went to Altitude, which reminded me very much of 200 on Fifth in New York. I love rooftop views, and this one was amazing, especially because we could see the entire F1 track illuminated below. 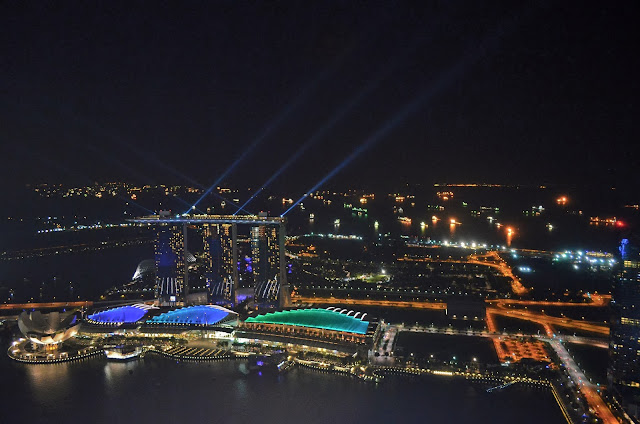 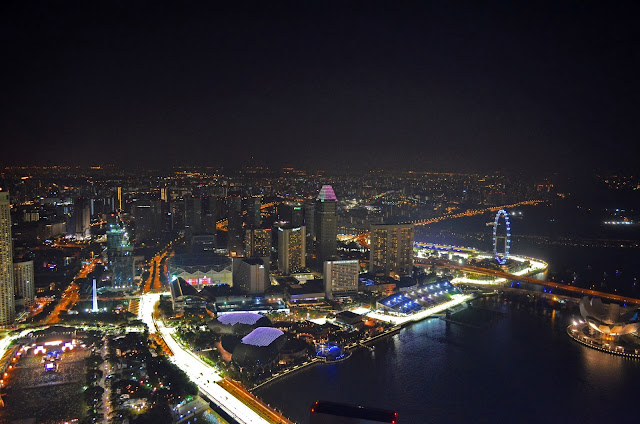 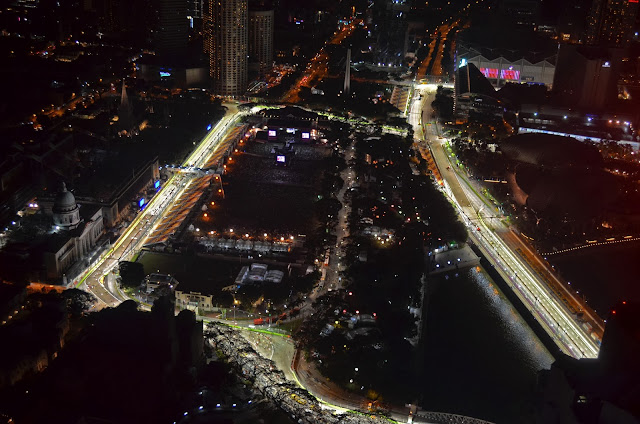 Even though our hotel, Pan Pacific Orchard, was at the bottom end of 5 star, I do have to acknowledge that they let us check in at 7am and check out at 7pm, which made a big difference. The hotel is also located very centrally, just off Orchard Road, and there was free wifi, so I probably would stay there again. I booked on hotels.com which seemed to be much cheaper than booking on the hotel’s website.

All in all, it was SUCH a great trip- Rishav loved it too. INSEAD is on the list of MBA schools we’re applying to, and it has campuses in Singapore and France- so who knows, maybe I’ll be returning sooner than I think!

That’s it from me for now. Happy weekend!

Win a sushi masterclass for 2 at The Hilton 2 days in Dubai, with Nokia Connects