Firstly, I’m so sorry I haven’t gotten onto blogging about my trip sooner. It’s been pretty crazy since I’ve returned because I’m covering alot of the trip in the Sunday Independent in 2 separate double page features- one called “Best of Paris” and the other covering the cruise. I’ll be sure to let you guys know publication dates via Twitter and Facebook.  I also wanted to keep the quality of the blog posts high and not rush them, and it’s taken me some time to come to terms with the fact that I’m no longer on holiday- depression! I’ve never been on holiday for longer than 10 days so 3 weeks was a stretch for us but in retrospect I’m so glad we did it. I wasn’t completely at ease while away because my dad’s condition is still bad and I kept preparing myself to return immediately if he were to take a turn for the worse. I’m glad we went because everything turned out fine in the end.

I am going to skip straight to Spain for now and leave out Paris until later, because I don’t want to duplicate what I’m writing for the newspaper here. Once the story has been published, I promise to give you guys the lowdown on the city of lurve, but for now, I’ll just say that those 3 days in Paris could have easily been the best holiday I’ve ever had. We stayed in the best hotel in Paris (as rated by Trip Advisor), Hotel Fouquets Barriere, located RIGHT on Champs Elysees, and ate at 2 different Michelin Star restaurants. Let’s just say I got super lucky and managed to organise alot of trade exchanges so we didn’t have to pay for much. Paris is super expensive! Like, food literally costs double than the rest of Europe. We also went on a shopping spree at Louis Vuitton, no less, and the whole thing was just ridiculously fancy- I felt as though I was living the life of a celebrity!

Needless to say, we were bummed to be leaving Paris, but also excited to check out Barcelona. We had booked at the 4 star Hotel Neri, a small boutique hotel situated in the Gothic Quarter of the city. The 5 star hotels were just out of the question, and this one was the best option in terms of cost and location. It is actually an old 12th century palace! 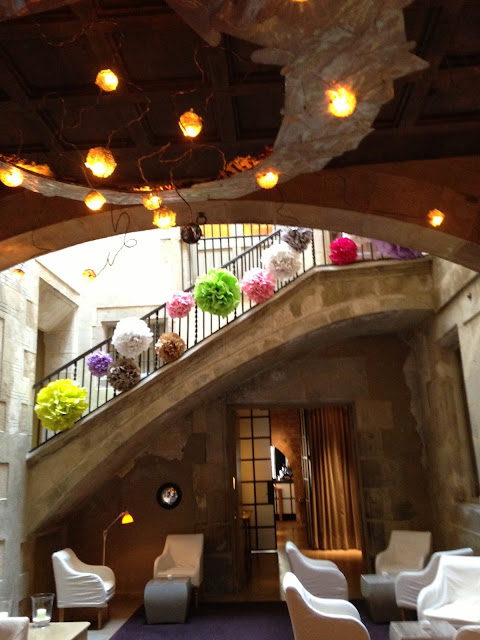 I’m always torn between booking at big hotel chains (who usually have great facilities and great locations) and small boutique hotels (where the service is more personalized and the  rooms aren’t stock standard). I like to go for a mix of both. At Hotel Neri, the breakfast selection was particularly impressive- everyday we were given a continental platter to share, and then we could still choose a hot breakfast. 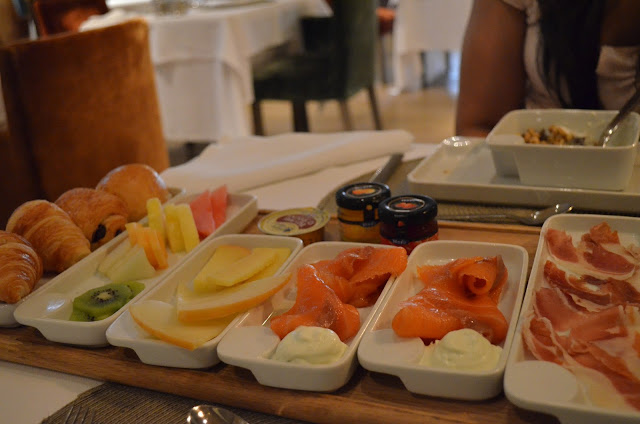 In terms of touring, my first to-do is walk. I love soaking in the vibe of the city and see all the places I want to return to. I’ve tried loads of tour guides and I have to say that the “Top 10” series is my favourite. It quickly highlights all the must-dos, and gives loads of ideas for eating and sightseeing. They have these books for most tourist destinations in the world. 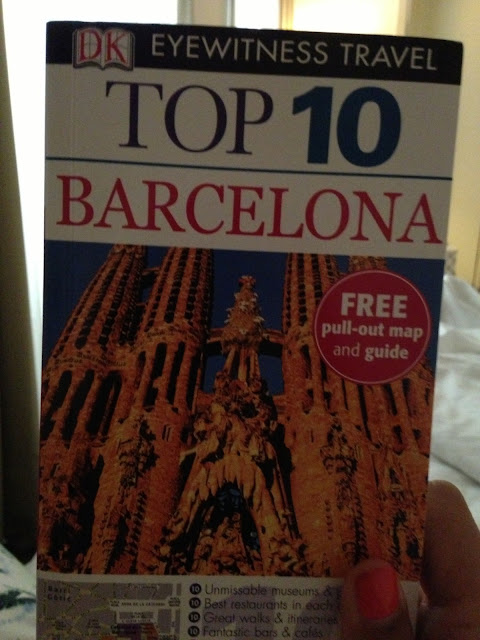 One of the things I love about Europe is that there’s so much history everywhere. You could be walking down a random street and come across an ancient building sign or an interesting balcony… for the first day or 2 you just look around in awe. Our hotel room was small but it was modern and had character and all the amenities we’d need. It is located on a small alleyway that can only be reached by foot, which was cool during the day but not so cool at night when there weren’t many people around. My rule when travelling is that I’d rather not go if I have to stay in a crappy hotel. I want to be comfortable and not dread going to bed each night. We also ate at good restaurants and had a glass of wine or a cocktail when we felt like it, even though at times the price hurt. As much as seeing the historic buildings and landmarks is cool, a big part of travel for me is experiencing nice restaurants and basically transferring my normal Jozi life to another city. I don’t want to eat Burger King or McDonalds everyday, I’d rather save up until I can afford to enjoy myself. 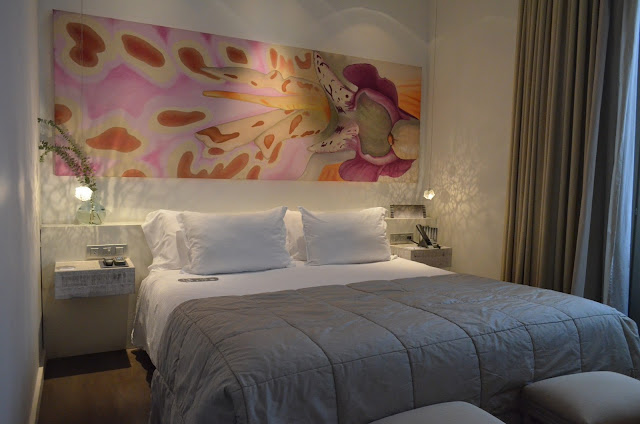 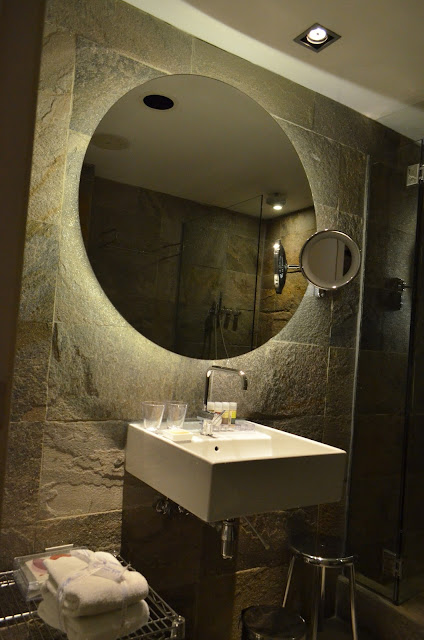 Barcelona is really compact and it’s easy to navigate the whole city on foot. We spent day 1 wandering around the area around our hotel. We also did some shopping at the usuals like Zara, which is a Spanish brand. The Zara stores in Spain are massive- like the size of Stuttafords in Sandton City. Prices weren’t that competitive, I bought a few items during the trip but it wasn’t close to the shopping we did in New York. There were TONS of tourists around. 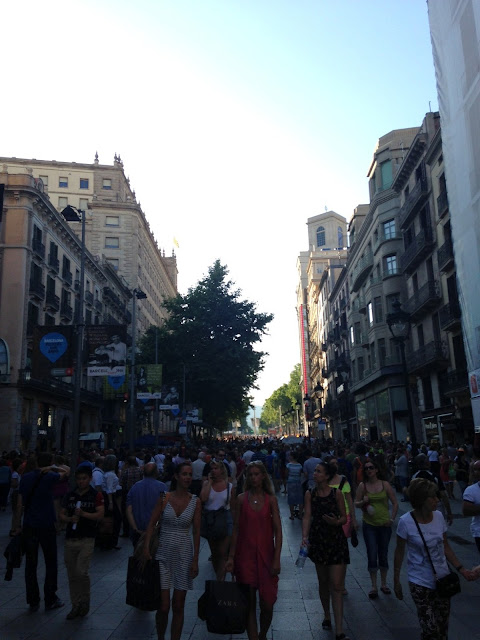 We heard that the party scene happens at the beach, so we took a 20min walk that night and headed to the beachfront, passing a few tapas bars and seafood restaurants along the way. Dinner in Spain is only at 10, and most clubs open at 2am. I was still accustomed to my 9:30pm SA bedtime but I was determined to push through and at least have one night of partying in Barcelona, especially because it was a Saturday. We went to dinner and ordered paella, which we got tired of very quickly- it’s in every second restaurant. We then went to a beachfront bar (unfortunately I didn’t want to lug my camera around) and ordered some cocktails, trying to pass time until 2am when we could hit the club. At midnight, people were only just arriving for dinner. By 1:30am we couldn’t anymore and found a taxi to go home 🙁 The next morning, we only woke up at 11am and missed breakfast at our hotel. We decided to take a walk, and found ourselves at the harbour, where we came across a few restaurants on the water’s edge. We sat down at a tapas restaurant and ordered a liter of sangria to start the day- a nice change from cappuccino!

The sun was on my back and I was just so happy. It was awesome to haul out my summer wardrobe after experiencing Jozi’s freezing weather. 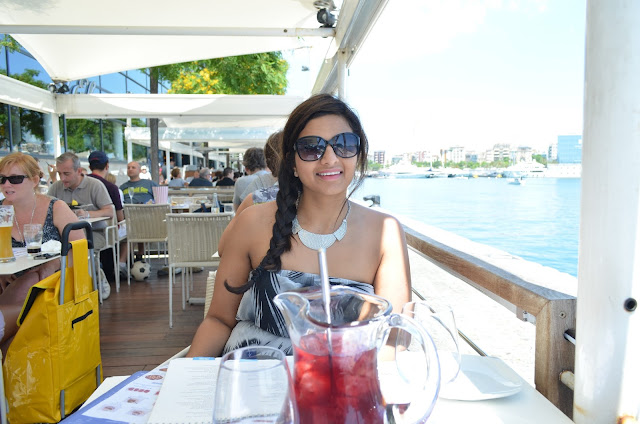 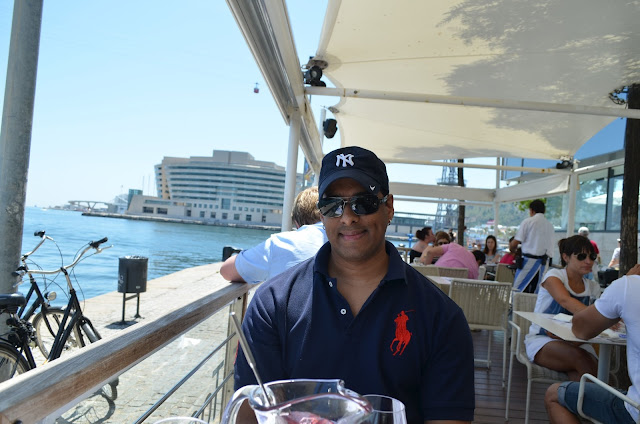 We then boarded the hop on/ hop off bus, which is really the best way to tour any city, because trust me, walking around and using the subway gets tiring! We drove past the beach- which looked awesome. Although the beach looks really cool, once you get there, what do you do? I like laying on a deck chair when I’m on an island but in a city in Barcelona there’s too much to do and see 🙂 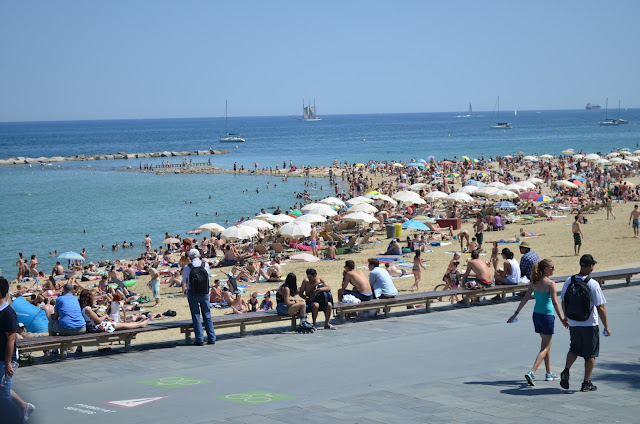 The bus took us to a viewpoint where one is able to catch a cable car. We didn’t do that, but we did admire the views. 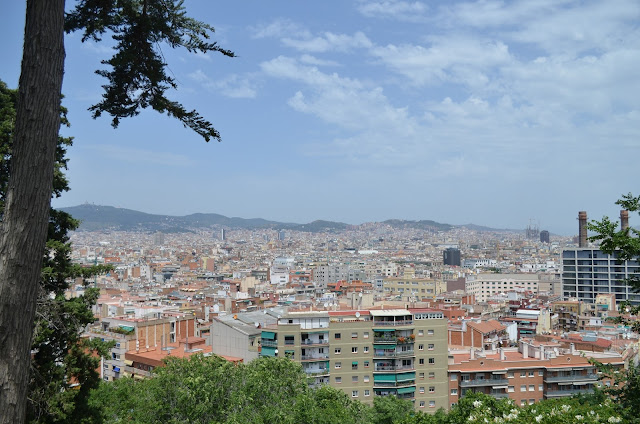 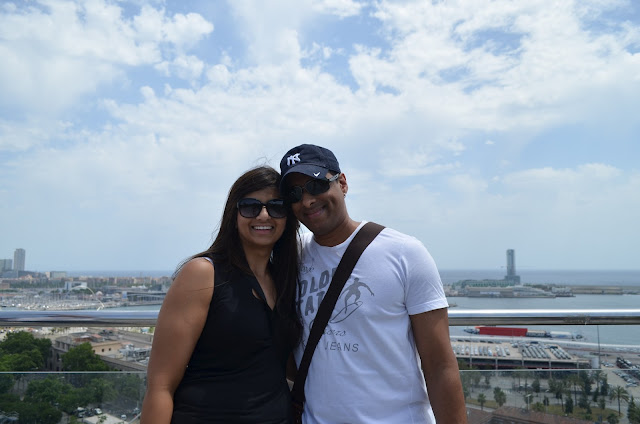 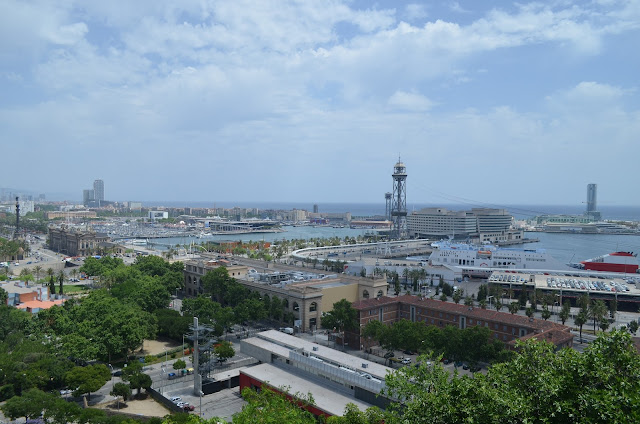 The next stop on the bus was the FC Barcelona stadium, which was seriously cool. We went on a tour and got to step onto the field, visit the changerooms and even go to the commentators’ boxes. 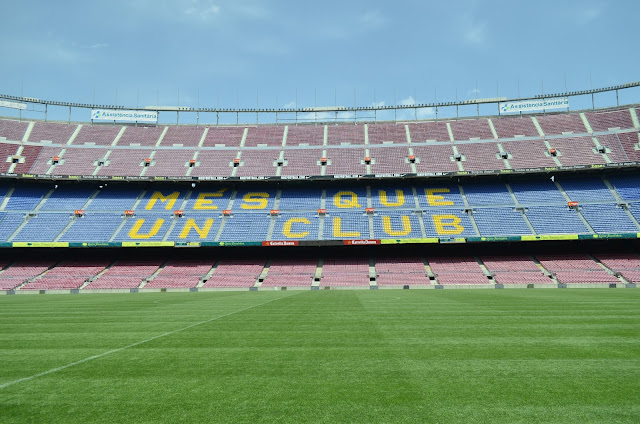 One of the main things to see in Barcelona is the architecture, more specifically that of famed architect- Gaudi. I’m not big on museums but we did drive past the cathedral that he built which was mindblowing- I couldn’t even photograph all of it- my lens wasn’t wide enough! 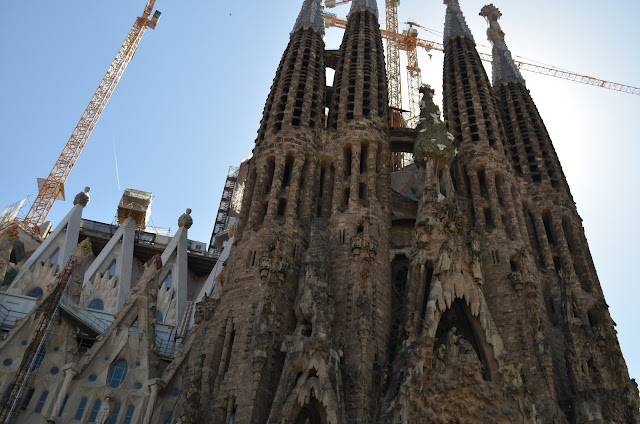 We also visited one of his famous buildings called La Padreda. From the beautiful sculptured roof, we had a stunning view of Barcelona’s most elite shopping street- you can see the Carolina Herrera store in red at the bottom. 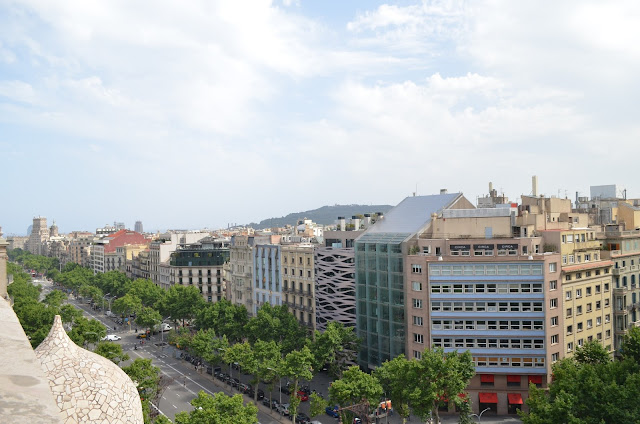 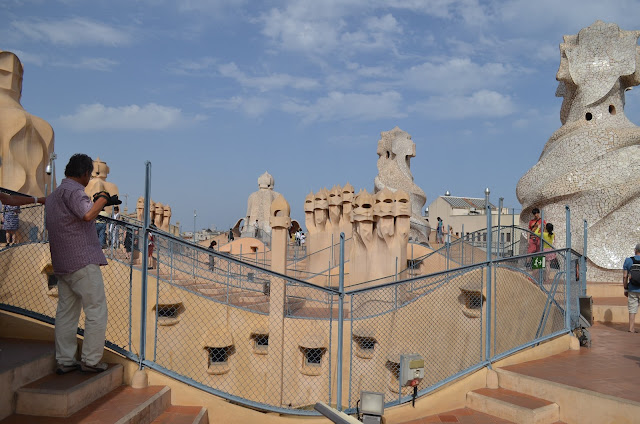 At this point, I got sick. I think it was a combination of too much alcohol (in Paris we’d have champagne at the start of lunch and dinner, followed by 2 or 3 glasses of wine, so we were basically in a constant state of inebriation..and then in Barcelona we were drinking sangria by the liter) and just going to alot of touristy spots and being exposed to germs. I was quite sick, but I pushed through, albeit in a medicated state. Not the best situation. Then, as I started getting better, Rishav got sick in Madrid, so we lost a day there because he is a man and cannot push through. Not the worst thing in the world but at the time it felt like it.

Every afternoon, we would find a sidewalk cafe and have tea and “delights”, as I like to call them 🙂 In Barcelona, our delight of choice was “churros”- like mini doughnuts. These are often served with hot chocolate topped with cream, and the hot chocolate there is like melted chocolate- so good! 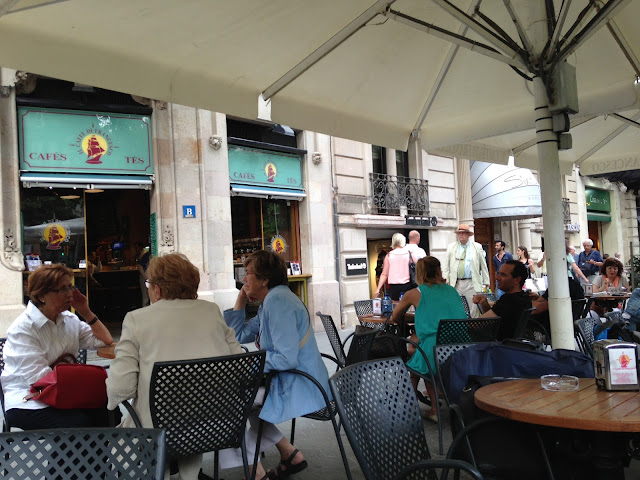 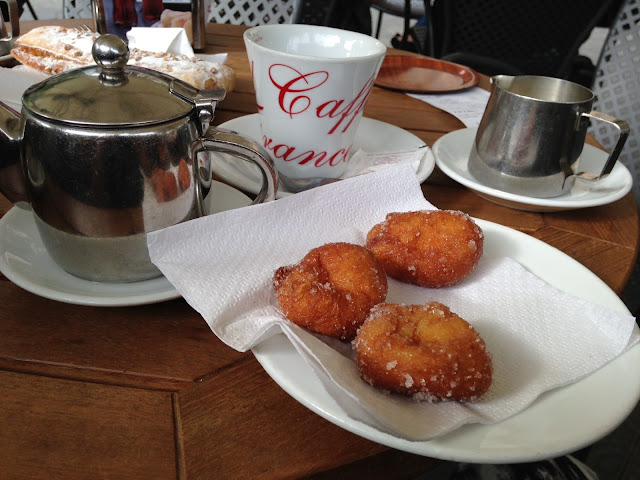 On our last day in Barcelona, we walked through Las Ramblas, a street that stretches from one side of the city to the other. It is lined with souvenir shops which didn’t interest us much, but we did find an awesome food market recommended to me by one of my Twitter followers. I almost wished that we were staying in an apartment so that we could have bought some of that deliciousness and cooked it at home. 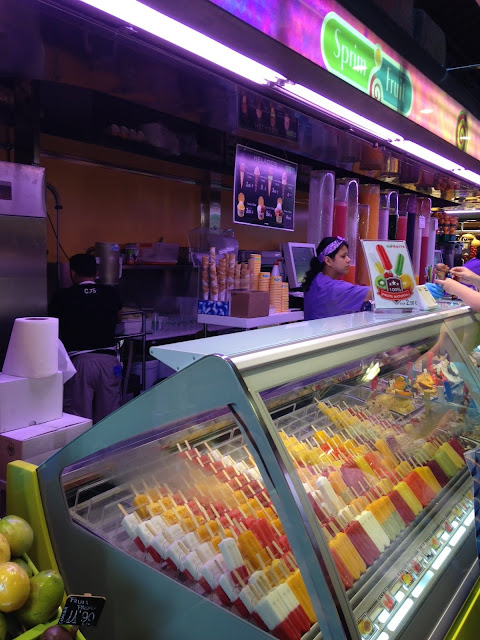 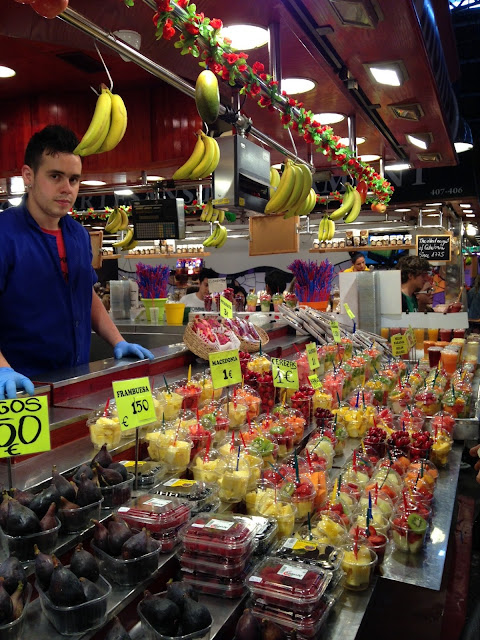 If I had to visit Barcelona again, I’d be torn between staying in the city or at the beach. The city is great for touring and shopping, but the beach is where the party’s at! We were hosted for lunch at the awesome W-hotel. Although I was sick and miserable, and there was only outside seating on the coldest day of our trip, we were still wow’d by the food and the hotel itself. The seafood was some of the best I’ve had in all of Europe- fresh, succulent and flavourful. 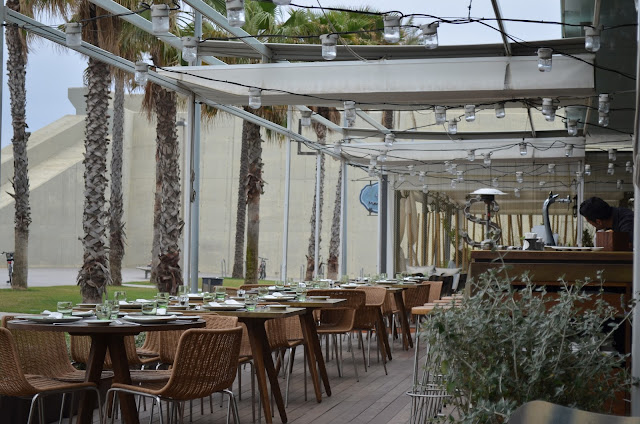 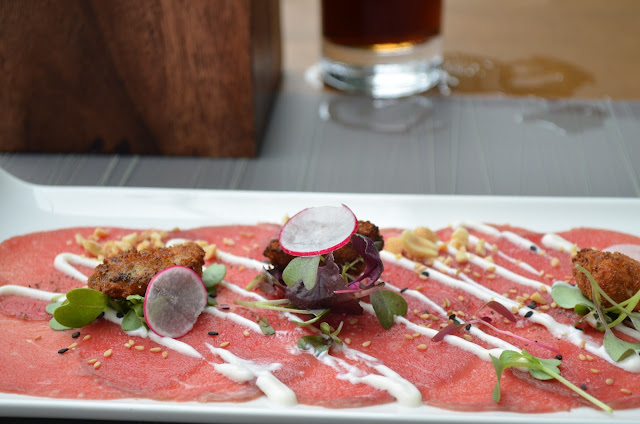 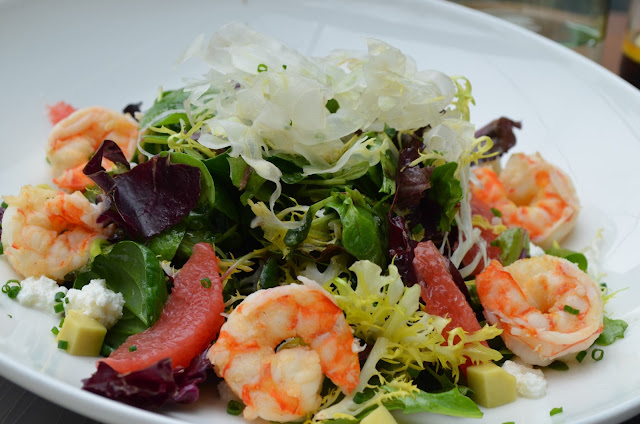 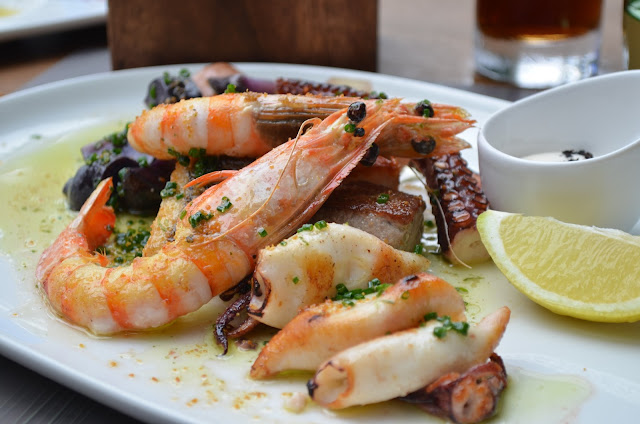 I loved the dessert menu- we ordered a dessert burger. How real does it look?! It’s chocolate brownie, topped with biscuit, sandwiched with berry coulis and sliced mango. 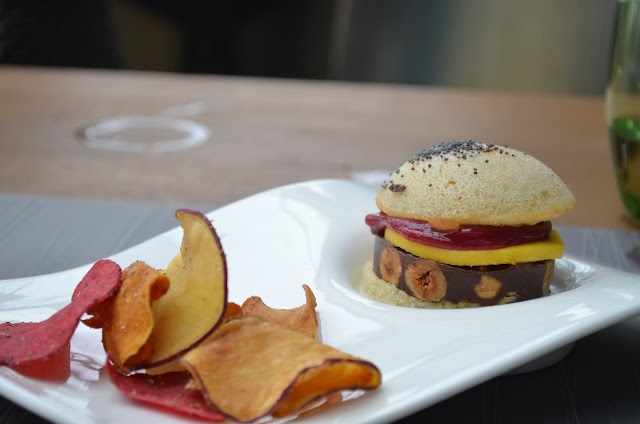 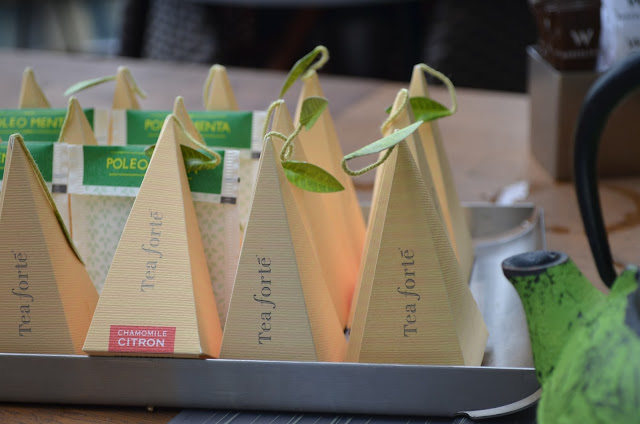 Also loved this gesture at the end of the meal… we were STUFFED at this point. 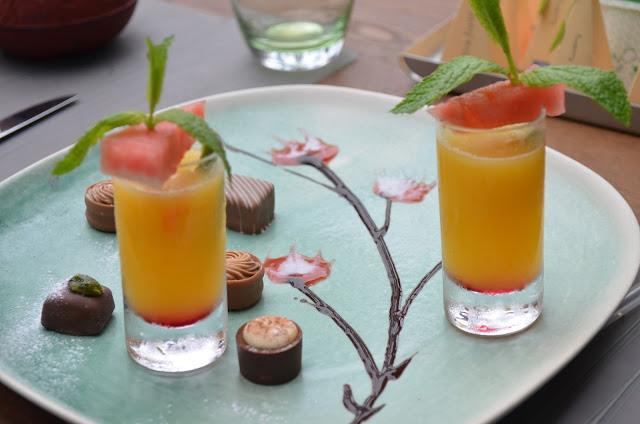 Barcelona is a very chilled, relaxed city- it’s great if you want to spend a few days on the beach, shop a bit and party at night. Prices are ok-ish, expect to pay around 50 euros for a 2 course dinner plus 1 drink for 2 people. There are bikes available for rent everywhere and we saw loads of people riding around on those. And if you do like art, there are tons of museums to visit. Really something for everyone. Too quickly, our 4 nights in Barcelona were done and it was onto Madrid, which I’ll be blogging about soon!