When I first heard of Diner en Blanc, I dismissed it, categorising it in the same group as the numerous “colour festivals” which have happened this year. It seems as if dressing in white has been the new prescription for everything from marathons to house music parties.
Then I stumbled across a picture of a Diner en Blanc event in Paris, which took my breath away. With the Eiffel Tower in the background, guests were seated at dozens of long tables, dressed elegantly- women wore white hats and gloves, men wore white coats and formal pants. 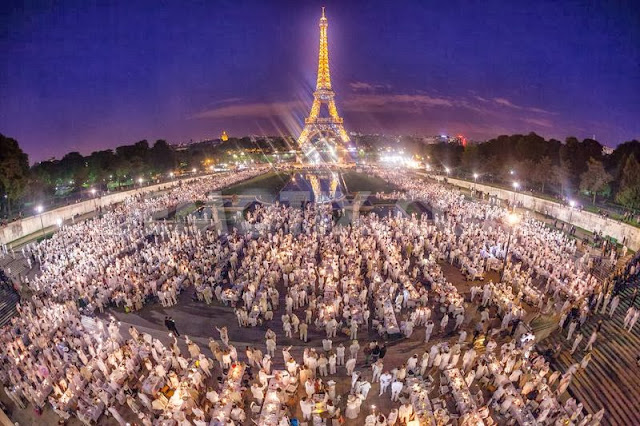 By the time I realised I wanted to go to the event, all 1500 tickets had been sold out, so I put my name on an already lengthy waiting list. By a stroke of luck, I scored myself two tickets, and so last week Friday, I dug out the only white dress I had, paired them with a new pair of white shoes, and waited for the secret location to be revealed. 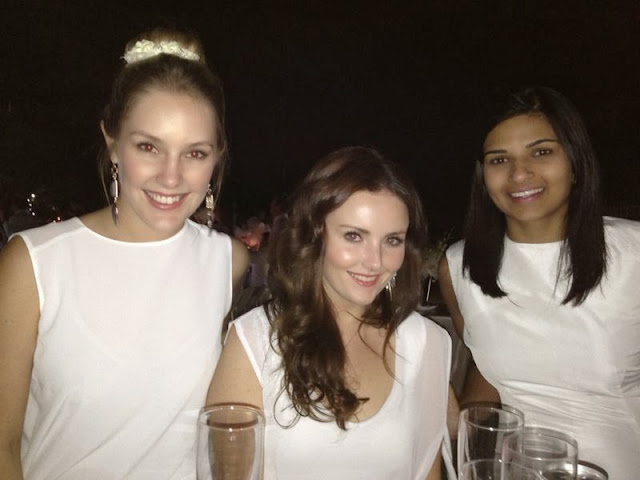 The concept behind Diner in Blanc is simple. Launched in 1988, a Frenchman by the name of Francois Pasquier decided to host a dinner party in Paris to reconnect with old friends. He asked guests to dress in white, so as to be recognizable to one another. Guests were told to bring their own crockery, cutlery, and food. Paper or plastic plates, cutlery or napkins are strictly forbidden, with guests being encouraged to go all out to create a beautiful table. Each guest was told to bring a friend, and the evening was such a hit that the initial invited guests wanted more friends to join in the following year. Over the years, the interest has grown, and in 2011 the United States launched its first Diner en Blanc in New York.  Last year, Diner en Blanc International was formed, spanning five continents. Each city must follow a standard process- diners gather at a secret location with the sole purpose of sharing a high quality meal with good friends at the heart of one of the city’s most beautiful locations.
The Jozi event was held in the gardens of the National War Museum in Saxonwold- a museum I had no idea existed. Guests were asked to meet at 8 different locations across the city, and were shuttled to the dinner by bus. 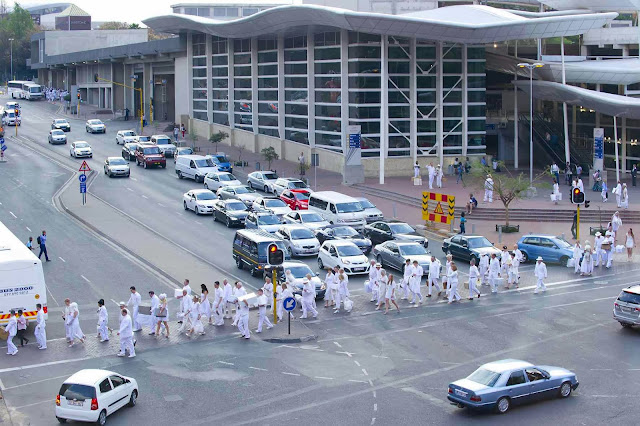 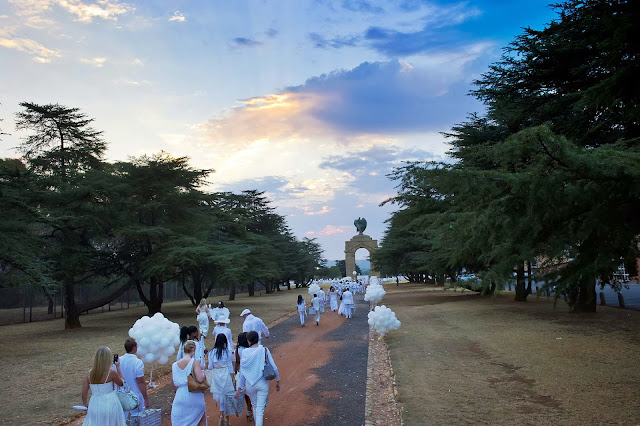 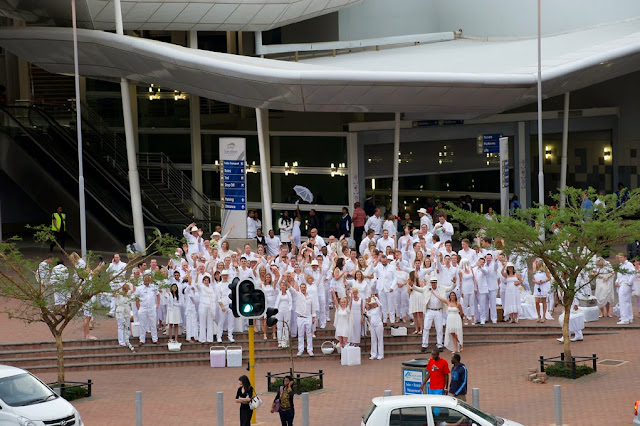 I was struck at the amount of effort people went to. No cream, beige  or tan is allowed- every single person had to be dressed head to toe in white. Guests brought white picnic baskets filled with gourmet picnic fare (fast food is strongly discouraged), and some tables were spectacular, complete with fairly lights and flower arrangements- all put together by the guests themselves. 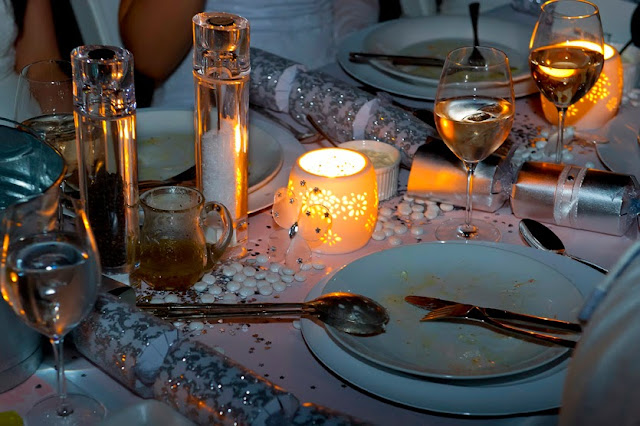 The traditions of the initial event have been carried through over the years. At 19:30 sharp, guests were instructed to wave their white napkins in the air to signal the beginning of the dinner festival. At 20:30, helium balloons were distributed, with guests being asked to write a wish on a piece of paper, attach it to the balloon, and release it into the air. Seeing hundreds of white balloons floating into the air was definitely something to remember. At 21:30, each guest was given a sparkler to light, signalling the opening of the dance floor. 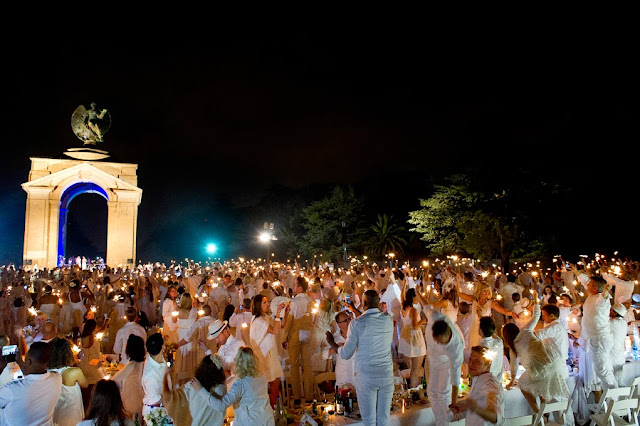 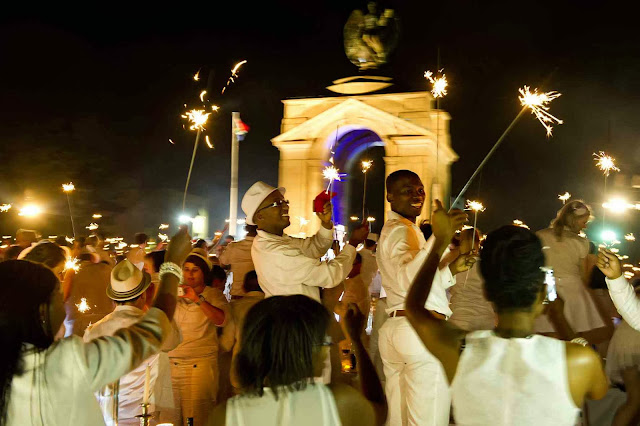 After surprise performances by the Rockateers and Flash Republic, a DJ played everything from old school classics to the latest RnB hits, and people let loose. At 23:00 sharp, a trumpet call sounded the end of dinner, and a collective clean up effort began, continuing until the site was as neat as it originally was prior to the start of the evening. After that, guests left the site together in the same way they arrived, by bus. 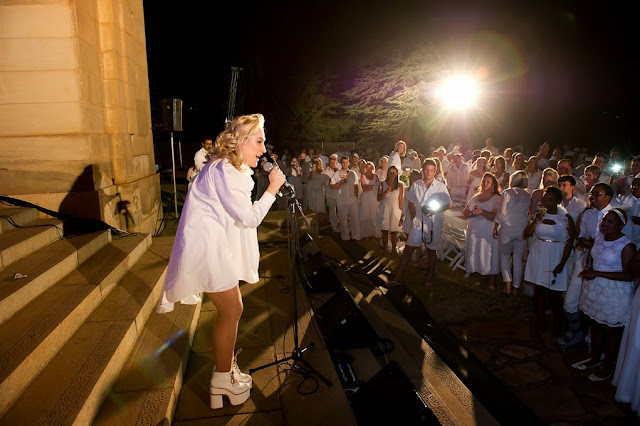 Given that this was the first time Diner en Blanc took place in Jozi, I was quite impressed with the level of organisation- seating 1500 people cannot be easy. Bar a few sound glitches, the event ran smoothly- everyone seemed to know what to do in terms of setting up their table. I later discovered that this is due to a network of volunteers. Each bus is assigned a leader, who must manage all the guests on the bus and answer any questions. This leader is required to participate in meetings and receive information long before the event.
Tickets for the event were priced at R350 per person, and tickets have to be purchased for 2 guests- no one may attend alone. For an additional cost, guests were able to order a picnic basket which they were able to collect on the night. In order to participate, guests must be invited by the hosts, or register on the official website’s waiting list and wait for an invitation. 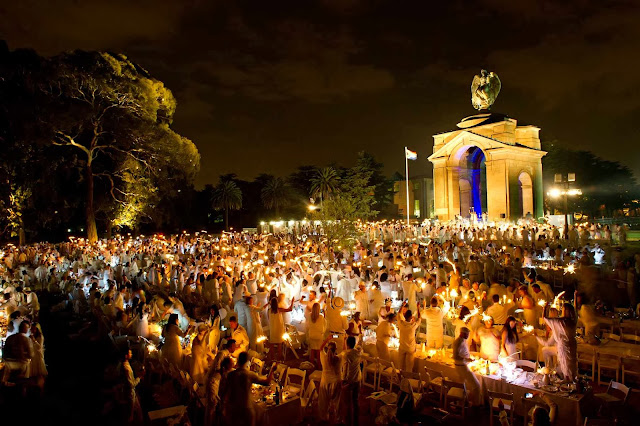 There are plans to host Diner en Blanc events in Cape Town and Durban next. Visit http://johannesburg.dinerenblanc.info for more details about the Jozi event.