How to spend 2 weeks in Japan: The Ultimate Itinerary

Hello hello! It feels good to be back on Jozilicious. It’s probably been a year since I’ve blogged properly. What have I been doing since? Well, DOING. Living in London is so consuming and it’s just super charged vs. my life in JHB. Between work, travel, socialising and just LONDON… being at home with my computer is the last place I want to be.

I miss writing, and my reader community.. so on this rainy Saturday I decided to dip into my travel log over the last 18 months and select one trip to tell you about. And that is – Japan!

High on my bucket list for ages, I’d been waiting for the right opportunity to go. 1 – time wise (it’s far and you need at least 10 days to do it justice) and 2 – money (it’s expensive!)

My ex colleague is Japanese and when she offered to host us in Japan it seemed like we just had to do it. I’d also heard that Japan is amazing when you’re with someone who can speak the language because English isn’t that great there.

And it ended up being one of my top 3 destinations of all time. The culture, the food, the people, the energy of Tokyo and the calmness of Kyoto – all incredible. We went in summer (August) and it was really hot. I’d probably recommend going in Cherry Blossom Season where you can see the blossoms and it’s not too hot… but beware that it will also be very touristy and expensive then.

I was pretty happy with the itinerary that we landed on.

The best 2 week itinerary for Japan:

(ok, it’s slightly shorter than 2 weeks – but “The ultimate 12 day itinerary wasn’t as catchy” – and if you have an extra 2 days you can spend it in Osaka.) We opted to skip Osaka since after a lot of reading and talking to people it sounded like a similar Tokyo.

Before I tell you what we did, there are a few things you need to do in advance.

Preparing for a trip to Japan:

How to spend 2 weeks in Japan:

Day 1: Tokyo: Arrive in Tokyo, nap after a long flight, and check in to your hotel. For this leg of the trip we stayed at Cerulean Tower Tokyo which had a great location and was relatively affordable with a pretty big, luxurious room and great views.

The hotel is situated in Shibuya, which is perfect for shopping and also for checking out Shibuya crossing – an insane pedestrian crossing – supposedly the busiest intersection in the world. There’s a Starbucks one level up at the crossing that you should check out for a nice view. Day 2: Tokyo: Check out Akihabara, the hipster / gamer area of Tokyo. We spent a couple of hours strolling around, had lunch, the boys played VR games which they loved, the girls played at the photo sticker booths, and we also checked out one of the infamous maid cafes. A bit weird for my taste, but a cool experience nonetheless.  Nothing sexual happens at these maid cafes – contrary to my belief. It’s more cutesy – the outfits aren’t very sexy and the “maids” just come by the different tables and play games, sometimes sing / dance. 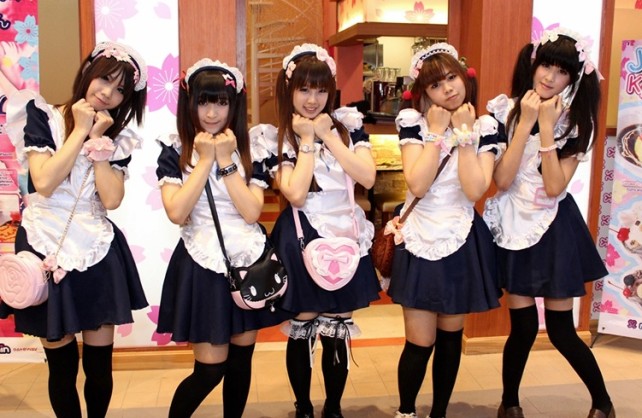 In the evening we did rooftop drinks. All the rooftop bars are quite hidden at the top of large buildings, so you won’t really see them strolling the streets – better to look up one in advance.

That night – we did karaoke for like 7 hours – until 5am! Karaoke is HUGE in Japan. We were in the Shinjuku area, where there were karaoke bars on every second street corner. We booked a room for the evening, and were able to order in food and drinks. They had a great range of English songs and the whole night was super fun.

Day 3: Tokyo – Hiroshima: We had a lazy morning strolling around some boutiques in the Daikanyama area, had lunch at a really vibey Mexican restaurant called Hacienda del Cielo that I would totally recommend, and then took the bullet train to Hiroshima. By the time we arrived in Hiroshima, it was too late to get dinner anywhere good – the speciality here is Okonomiyaki  – like a cabbage pancake. Ours wasn’t very good and I ended up feeling a bit ill post that 🙁 In Hiroshima we wanted to save money so we stayed a pretty crappy hotel called Hiroshima Washington Hotel. Probably wouldn’t recommend this one because breakfast was awful – and in Japan you don’t really find cute coffee shops where you can grab a croissant and coffee, so you really need your hotel breakfast to be good. The room was also really tiny, but it was modern and clean and well located so did the job.

Day 4: Hiroshima: I read mixed reviews about Hiroshima. I’m glad we went because it was nice to experience a smaller, less touristy city, and the museum was really good. It’s a pretty, scenic city and I would recommend it – although you don’t need more than 2 nights here. We spent our one full day at the museum, which was sad of course but also very informative. In the afternoon, we took the ferry to Miyajima – a small island close to Hiroshima where deers roam freely. Here, we roamed the market and tried all the delicious treats (this custard filled cake was AMAZING.) We saw a pretty cool shrine and also took the cable car up to the top of the island to check out the view. When we got back, it was sunset and the views were stunning.

That night, we had an average dinner that I don’t really remember and went shopping for KITKATS

We stayed at Hotel Gracary Kyoto Sanjo which I would totally recommend. The room was nothing fancy but it met our needs – and the location was right across from the food market which was perfect.

That evening, we explored the market and saw lots of weird and wonderful goodies (placenta essence – anyone?) of which we tried what we could. We also had dinner at a really good Tempura restaurant – what Kyoto is known for.

That night we strolled around and had drinks at a few tiny little bars called Izakayas. It is typically just a counter but very cute!

Day 6: Kyoto: A big touring day for us and one of my favourite days of the trip. We went to the golden temple which was beautiful, had incredible sushi (again), went on a Japanese traditional train called Sagano Scenic Railway (really cute – recommend kayaking down, we didn’t have time for this) and also to to the Bamboo Forest which is probably my favourite place of all time. I was in awe of the massive bamboos all around us, and the calming effect they had on me. So stunning. We ended off with some matcha soft serve and had dinner at a Kobe beef spot – everyone loved it but were still pretty hungry after because the portions are small!

Day 7: Kyoto – We spent most of this day at the famous Fushima Inari Shrine. We hiked all the way to the top, spending most of the time trying to get photos without any other tourists in them. This one is an absolutely must do – incredible.

We spent our last day in Kyoto at a cooking class by Cooking Sun – which was really fun and a great way to understand more of the background behind some of the cuisine we had been enjoying over the past few days!

Day 8 & 9: Fuji: We then made our way to Fuji. We couldn’t decide whether we wanted to climb Fuji or not – and eventually opted not to after hearing of friends who had gone the week before and queued for 2 hours to get to the top, only to find that the sunrise was obscured by clouds. There isn’t a whole lot to do in Fuji – but the lake itself is pretty (we went on the paddle boat.) We also went to a cool brewery, and spent the rest of the time chilling at the hotel’s hot spring baths (or onsen.) These are a bit strange – you need to go in completely naked. Our hotel had some private rooms which we tried, but many of them have baths in the rooms. This was some nice downtime before we headed back to Tokyo.

Day 10-12: Tokyo: By this point we were pretty tired – after a full on 10 days. We ended off on a high, staying at the Ritz Carlton. We had a Club room which gave us access to the Club, where there was a steady supply of food, drinks and a killer view. Suffice to say, we spent quite a bit of time here. The actual highlight of staying at the Ritz was the concierge who was absolutely incredible. She was like my personal PA for the whole time I was there – she booked all the best restaurants for us, and also helped us with other activities – like watching sumo wrestling and going to the tuna auction at 3am (followed by sushi for breakfast). The hotel itself was also extremely lavish and lux… definitely a treat.

Visiting the tuna auction in Japan:

We dutifully were up at 3am – there by 3:30, and then waited until 5am to watch the auction. It lasted about 20 mins and was cool – but I think you can still get a similar experience going there early and just having sushi for breakfast and walking around. There are limited spots available so it really is first come first serve.

Sumo tournaments are only at specific times of the year – during our trip, we weren’t able to watch a sumo match, but our concierge advised that we watch them practice at a studio. This was free – we just needed to be there early, and she called in advance to make sure they were practicing that day. A really cool experience.

Another highlight of this stretch in Tokyo was our meal at Narisawa – one of the best restaurants in the world – and another one our Ritz concierge managed to sort a reservation for. It was out of this world amazing… like way better than any of the Michelin star restaurants I’ve eaten at in Europe. The menu was essentially a story – with incredible plating and service. I would definitely recommend it!

And that was the end of a fantastic 2 weeks in Japan. One for the bucket list for sure!

Hope you enjoyed my return from my hiatus… maybe I’ll be back to share some of our other trips with you! Let me know what you’re most interested in: weekend trips I’ve done from London, London itself..?

Winter Spring Cleaning Is it time to switch from risk assets to other trading instruments?